In 2012, Bev Rudkin convened a meeting of a group of Wanaka residents, most of whom had direct experience with cancer or other life threatening illnesses, to explore the perception that there was a need for a palliative and respite care facility in the Upper Clutha. A concept for providing such a facility was developed and it was decided that there was community support for such a venture.

The Trust’s concept involved the inclusion of a palliative care suite in the proposed new Aspiring Enliven Care Centre (AECC) to be built by the Aspiring Lifestyle Retirement Village developers. Under the concept the Trust would own the Suite for the benefit of the Upper Clutha Community, with it being operated by the operators of the AECC. The Trust’s intent was always that the proposed Palliative Care Suite would augment the services provided in the area by other organisations such as Otago Community Hospice and the Cancer Society.

The Upper Clutha Hospice Trust was formed in early 2013, and reached agreement with the developers of the proposed Aspiring Enliven Care Centre (AECC) to have a palliative and respite care suite of rooms (the Suite) included in the AECC, at the Trust’s cost.

To support its Palliative Care Suite venture, the Trust commenced fundraising in mid 2013, with the opening of the original Upper Clutha Hospice Trust Shop in Ballantyne Road. This Shop has traded very well, staffed by a team of over 50 wonderful volunteers under Bev Rudkin’s overall management, and in 2015 was relocated to the larger premises it currently occupies, in CBD in Brownston St. The Shop enjoys magnificent support from the community both in terms of the quality stock donated for sale, and its patronage by the community and visitors to Wanaka.

Additionally, the Trust benefits from fundraising activities hosted by various groups and clubs in the community, such as proceeds from activities at the A&P Society Show, the Golf Club’s Hirepool Golf Weekend, Rotary and Lions club functions and from concerts. The Trust also organises regular fundraising functions itself, such as a “Collectables Sale” and the very successful Trelise Cooper Fashion Show.

The Trust was stunned when it was approached by the trustee of previous Wanaka resident Stina Mooyman, offering to fund the purchase of the Palliative Care Suite premises at the AECC. This magnificent offer secured the Trust financially and has enabled the Suite to be opened debt free.

The Trust has been conservative in opening the Suite with only one Patient Room and an attached Family Room. Provision has been made for the inclusion of a second Patient Room in the Suite when its use requires additional capacity.

With the Suite secured, the Trust has commenced providing material support to terminally ill patients electing to remain in their own homes, through the provision of equipment for use by the District Nurses and Otago Community Hospice staff to assist such patients.

Stina & Dirkje both immigrated as young women to New Zealand from Holland after WWII, looking for a better life than was offered at the time, in the ruins of post-war Europe.

From allocated new immigrant work in Dunedin, they went to Te Anau, where through very hard work and a willingness to take business risks, they developed a number of very successful businesses over a period of thirty years.

On the sale of their businesses when they were in their seventies, they retired to Wanaka.  Dirkje unfortunately died only a few years after their move , but Stina enjoyed some twenty years in Wanaka, before moving to a Dutch retirement village in Henderson. An enthusiastic gardener, she was well known in the town.

Stina, through her trustee John Harrington, donated the funds to the Trust to enable it to purchase its interest in the Palliative Care Suite. Her donation secured the Trust financially and will enable it to play a greater role than first anticipated in supporting those with terminal illnesses in the community.

The Trustees on behalf of the Upper Clutha Community, wish to record their gratitude to Stina for her most generous donation.

The Trustees also wish to record their gratitude to Stina’s trustee John Harrington, for his role in organising the donation.

A biography of Stina Mooyman written by Susan Buckland and entitled “Stina”, is available for purchase at the Stina Mooyman Palliative Care Suite, or at Paper Plus in Wanaka or Te Anau. Proceeds from the sale of the biography go to the Upper Clutha Hospice Trust. 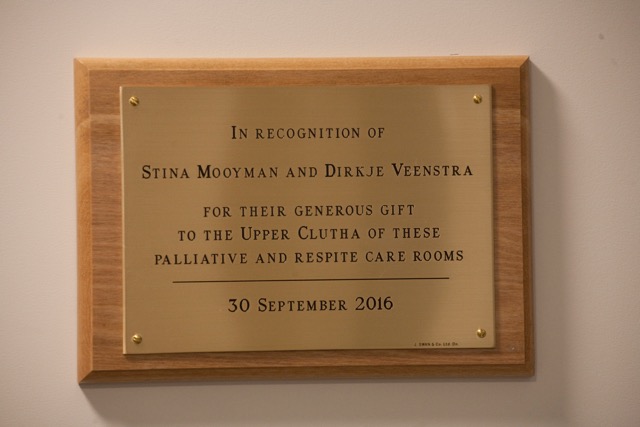 Copyright All Rights Reserved © 2016 | Photography by Heather McLeod & Russell McGeorge | Login | Privacy Policy
We use cookies on our website to give you the most relevant experience by remembering your preferences and repeat visits. By clicking “Accept All”, you consent to the use of ALL the cookies. However, you may visit "Cookie Settings" to provide a controlled consent.
Cookie SettingsAccept All
Manage consent

This website uses cookies to improve your experience while you navigate through the website. Out of these, the cookies that are categorized as necessary are stored on your browser as they are essential for the working of basic functionalities of the website. We also use third-party cookies that help us analyze and understand how you use this website. These cookies will be stored in your browser only with your consent. You also have the option to opt-out of these cookies. But opting out of some of these cookies may affect your browsing experience.
Necessary Always Enabled
Necessary cookies are absolutely essential for the website to function properly. This category only includes cookies that ensures basic functionalities and security features of the website. These cookies do not store any personal information.
Non-necessary
Any cookies that may not be particularly necessary for the website to function and is used specifically to collect user personal data via analytics, ads, other embedded contents are termed as non-necessary cookies. It is mandatory to procure user consent prior to running these cookies on your website.
SAVE & ACCEPT